Where you can find us:

Our orchard is located on CR804 in Etowah Tennessee, across the street from Coghill Baptist Church. 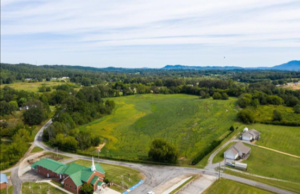 This is the least known of America’s native fruits, and ironically it is also America’s largest and many would say most flavorful fruit.  It is native from southern Ontario to northern Florida and as far west as Texas, Arkansas and Missouri.  Tennessee is literally in the very heart of its range, and it is very popular in the Ohio River Valley States of West Virginia, Ohio and Indiana.  Lewis and Clark mention eating them frequently.  “One can live well on pawpaws.”  For the Native Americans, pawpaw was a seasonal treat because it was perishable, but much loved it is thought, as where the Native Americans lived they transported and planted pawpaw seeds, leading to isolated patches of pawpaws outside their normal range.

The species name of pawpaw is asimina, a Creek word “asimina” or “simina”.  And the word pawpaw is related to the Caribbean native word papaya, a fruit with which pawpaw is often confused, though they are unrelated.

Unlike more commercially available fruits like apples, pears, plums, pawpaws have resisted modern market cultivation, some say because of their very short shelf life and tendency to bruise.

Selections at the Orchard include selected wild pawpaws, and 1st and 2nd generation improved cultivars from Jerry Lehmann, James Claypool, the Kansas State University breeding program and Neal Peterson.  These brief efforts to develop the fruit show enormous potential for the fruit commercially.  We, however, like the amazing wild variability of the fruit.

The American persimmon (Diospyros virginiana) was a staple of Native American diets, but it is much misunderstood by modern Americans, who mainly know them as mouth puckering and distasteful.  And if they are picked before peak, soft ripeness, they are indeed an unforgettable shock, being very dry and unpleasant to taste.  This repels critters, too, though, who also dislike the astringency in the unripe fruit.

The American persimmons grown at the Orchard range from simple wild ones, to some forest selected varieties, and some first generation crosses of these selections from the James Claypool and Jerry Lehmann cultivation efforts.

Appalachia has a long history of settlers “making a go of it” in marginal conditions – hilly plots, rocky soil, pressure from woodland creatures (critters and varmits!).  Many times, the settlers were the poor who could not find a place in the rich fertile plantation lands east and south of the Appalachian mountains.  One finds their plants sometimes as the sole remnant of homesteads that formerly dotted the landscape and hollows (“hollers and coves”) of the region.  What they chose were plants tolerating poor soil, fluctuations in rainfall, and most of all resisting, browsing by deer.

These truly bountiful trees come to us from Asia – mainly Japan and China – where they have been cultivated for a couple thousand years.  They produce the highest number of pounds of fruit per acre of any fruit grown by mankind.  A single small (12′-15′) tree can produce 200-300 pounds of fruit!

Asian persimmons (Diospyros kaki) were introduced by Asian workers who came to America in the mid-1800’s to help build America’s transcontinental railroads.  Starting in the West, gradually they moved eastward, delighting people who made a place for them in their gardens with their sweetness, flavors of baking spices and butterscotch, their long shelf life and of course the chance to share abundance with friends, neighbors and family.  They can be picked ahead of their full ripeness, and will ripen over weeks on the counter and even in the refrigerator.  They can also be dried and make an almost candy-like fruit, even sweeter than dried apricots.  The genus name “diospyros” means “food of the gods”, and Asian persimmons very rightly carry this genus name.

Some of the most interesting fruits in the persimmon family are the American-Asian hybrids, which go botanically by the designation Diospyros hybrid.  Work was begun in the 1970’s in the then Soviet Union, in Ukraine, in crossing American persimmons, with their pronounced flavor and aroma, with Asian persimmons, with their size and thicker skin.  And this work has continued in the US in the work of American horticulturists.  The AFFN orchard is proud to be home to several of these varieties.  We are always on the lookout for more, and these are involved in cross pollination and plant breeding efforts.

Figs are another surprise in Appalachia.  One hears over and over the surprised exclamation “Those grow around here?!”  Yes, and they grow very well!

The plants and the immature fruit magnificently resist pressure from birds and browsing deer, and the unripe fruit and the leaves are filled with a bitter, latex-rubber compound (much like milk weed).  But this disappears as the fruit ripens.  Fruit can be picked a day ahead of peak ripeness and left to ripen overnight on the counter, and then refrigerated (if kept dry) for the next couple of weeks.

Yes – one find pomegranate trees near old Appalachian homesteads!  Who knew?!  One does find them here and there at old home sites in the Smokey Mountains.  So, the fruit has been grown in these parts for over a hundred and fifty years.

The AFFN Orchard grows selections developed in the Russian selection program started in the 1970s to find flavorful and cold resistant cultivars.  We would very much like to add to our collection samples from some of the old home sites in Appalachia.  Volunteers are encouraged to bring them to us.

Known to the Cherokee as “Ocoee” an entire river valley is named after this edible native plant, presumably for its beauty and flavor.  It is also the lesser known Tennessee State Wildflower, designated as such in 1919 by Tennessee Senate Joint Resolution 13.  (The State’s “cultivated flower” is the more commonly known iris.) 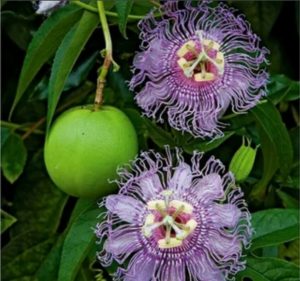 Obviously, this is a berry with a marketing problem…Who would eat a chokeberry?  Luckily, they also go by the more appetizing name Aronia berry.  And although they are from Appalachia, they have been almost entirely forgotten, except by the deer.  I am pretty sure this is their absolute favorite bush…

Forgotten in Appalachia, it is studied in…wait for it…Iowa. (?!)  And the country exporting 90% of the world’s Aronia products is not even the USA.  It is…wait for it…Poland!  Bravo to the Poles for having recognized this berry’s amazing antioxidant properties and fine flavor!

We are trying to grow and re-popularize this fruit, if we can save some from the deer…

But huckleberries do have a brighter flavor than blueberries, much like wild strawberries have a brighter flavor than their commercial counterparts.  Gaylussacia are also seedier than vaccinium, having ten seeds per berry rather than five, and the seeds tend to be crunchier.  Vaccinium prefers rather acidic soils whereas Gaylussacia is less dependent on this soil feature, better suited for our less acidic Appalachian soils.

Honeyberries or Haskaps (from Japanese native Aino language “hassukappu”) grow all around the northern hemisphere spanning Siberia, the Japanese islands, boreal Canada all the way down to Mexico.  It has a phenomenal geographic range, and is becoming more popular as a cultivated fruit plant.  Many wild varieties are astringent and tart, leading them to have been mostly used for medicinal purposes, or admixed with more flavorful berries.  But selections from the wild, and 1st and 2nd generation crossings, have resulted in remarkably sweet and flavorful cultivars.  We are giving them a try to see if they can become a new homestead favorite drawn from our native stock.

The berries are juicy, are tart, and have something of the clove aroma.  What they lack is the muskiness or earthiness of European blackcurrants, a flavor that some North American palates consider to be an “acquired taste”.  To maximize the sweetness, these bushes need full sun, and bird netting, so that the berries ripen before the birds make off with them.